Global maps are now on the global CED maps page.

If you would like to embed cedamia’s data sheet, maps, or any of the charts below on your own website, please email us to ask for the embed codes.

To request an addition to the global maps and the data sheet above, please send the following details to info@cedamia.org:
– Name of council (or other jurisdiction)
– Date of the meeting/debate that passed the Climate Emergency Declaration motion
– Link to the declaration motion text (ideally the minutes of the meeting, or the meeting agenda with evidence that the motion passed without amendment, or the amended text)
– A link to a news article or council announcement about the declaration (if you have one)

The above animated chart shows all the countries that have more than one CED.

Declared a Climate and Environment Emergency. The declaration text is here.

Note that the above includes only those local councils that have passed motions that include an item declaring a Climate Emergency (or acknowledging or noting in some way that we face a Climate Emergency). But as part of this growing wave of more ambitious climate action, a number of other councils have also passed motions committing to stronger action than previously. Some of those councils are noted here. 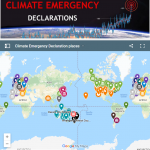 The above chart excludes the 403 Quebec councils that signed on to the standard GMob declaration between September 2018 and November 2019 and the 225 local councils in South Korea who all signed on to a standard declaration composed by the National Association of Mayors on 5 June 2020. In both cases all of the signing councils had to be persuaded individually, a process which took some months, so these CEDs are not necessarily any less important than the other global CEDs whereby each council crafted its own resolution statement reflecting local issues and action aspirations. A version of the chart which includes the multi-sign-on CEDs in Quebec and South Korea is below.