Over recent months our focus has been on the state/territory and local council levels of the Climate Emergency Declaration campaign, but even so the signature count on the national level of the petition has been climbing and is now at 20,667 signatures.

– The SA state election, and the byelection for the Batman federal, both on March 17

– Fossil fuel myth-busting – what would the impacts be if states/territories ban NEW fossil fuel extraction projects (one of the NMBI petition asks)?

– The No More Bad Investments (NMBI) campaigns in SA, Qld, Vic, and NSW

– What is Darebin City Council doing now that it has formally adopted its Climate Emergency Plan?

Facebook seems to be favouring groups rather than traditional pages these days, so we have set up a new cedamia group. It is public, meaning anyone can look at it and ask to join, so please do! We’re trying out the setting which allows any group members to post, but with all posts needing admin approval so we can keep a very tight focus on Climate Emergency campaign initiatives and only publish very relevant news items rather than being a grab bag for anything climate-related.

We sent a pre-election No More Bad Investments (NMBI) survey to all candidates in the SA state election. You can see the questions we asked and the responses we received at https://www.cedamia.org/sa-candidate-survey-responses/. To summarise, we received VERY supportive responses from Greens and Dignity Party (formerly known as Dignity for the Disabled) candidates, a half-way supportive response from one Xenophon candidate, and none from the other candidates. The Greens response was hardly surprising since last year the SA Greens formally passed a motion to support a Climate Emergency Declaration, but we were particularly pleased to see such good support from Dignity candidates.

In practice, South Australian politicians from most parties seem to be in a race for the top when it comes to renewable energy policies and election promises. The current Labor government has indeed been achieving good things to help advance SA’s renewable energy success story, but unfortunately they are ignoring the other side of the coin, namely the climate imperative of keeping fossil fuels in the ground. Details of who is promising what are in Conservation SA’s election scorecard here.

One hot election issue is new gas extraction projects in the south-east of SA. One test well has already been drilled and deemed successful, so this is pretty much the last chance to stop any more gas wells being drilled and, depending on who makes up the new SA parliament, this may indeed be possible. Anne Daw has been campaigning tirelessly against this and she hopes to print and submit a very large number of requests to the new SA parliamentarians straight after the election. If you’d like to help, please write a short email, starting with ‘To SA Parliament’, asking them to ban new gas wells in the south-east of SA, and send the email to annedaw@bigpond.com.

Point 1: We don’t need any new coal mines or gas wells to ‘keep the lights on’. We already export about twice as much ‘energy’ as we consume within Australia, and local demand is fairly flat. 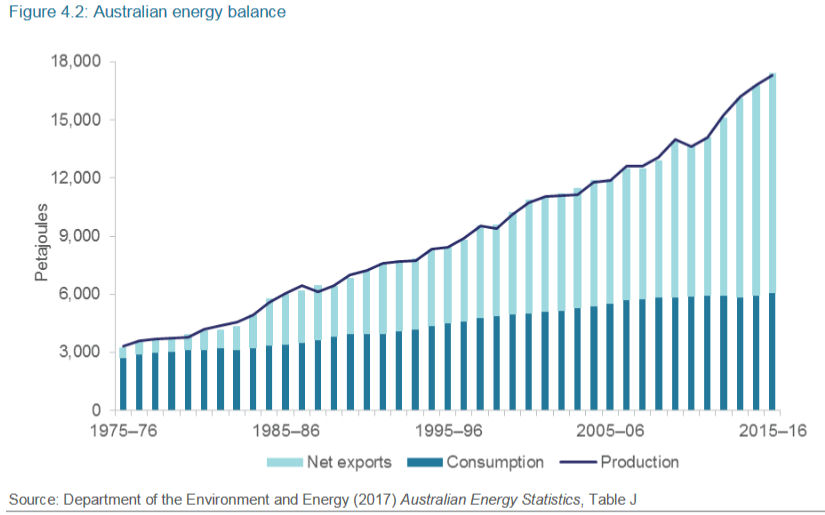 Point 2: ALL the coal and gas extracted from ALL new coal mines and gas wells in Australia will be exported (or an equivalent amount from existing mines and wells would be freed up for export). Despite the claims of there being an east-coast gas shortage, the gas demand within Australia is falling. The only demand that is rising is Liquefied Natural Gas (LNG) exports – the brown area in the graph below. 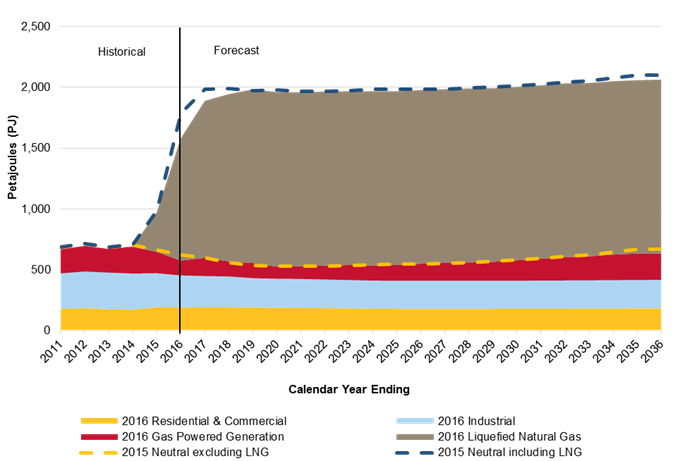 Point 3: NEW fossil fuel extraction projects will give surprisingly little financial benefit to Australia. Onshore projects pay state royalties, although this brings in less than one might expect, but if you subtract the generous subsidies states give to new projects the figures are even lower. For example, over the six years from 2010-11 to 2015-16, Queensland received an average of $1.94 billion/year in coal royalties. But if you subtract the $1.27 billion/year in subsidies the Queensland coal transport sector received over the six years from 2008-09 to 2013-14, Queensland’s ‘gain’ from its numerous coal mines was only around $670 million/year.

Offshore oil and gas projects don’t pay state royalties, but all oil and gas projects are subject to the federal Petroleum Resource Rent Tax (PRRT). However, the PRRT settings are so generous that new extraction projects won’t pay any PRRT for a decade or more, and PRRT ‘credits’ even offset income tax liability – we are more less giving away the oil and gas from new projects.

According to ATO corporate transparency data, at least 22 major fossil fuel companies paid no income tax in 2015-16, including Santos (income of $3.47 billion) and Beach Energy (income of $589 million), along with international companies like Chevron, Shell, and ExxonMobil. Most also paid none in the preceding two years.

See this article for more details. State by state details concerning the above myth-busting points can be seen in the Talking Points on our website for SA, Qld, Vic, and NSW. 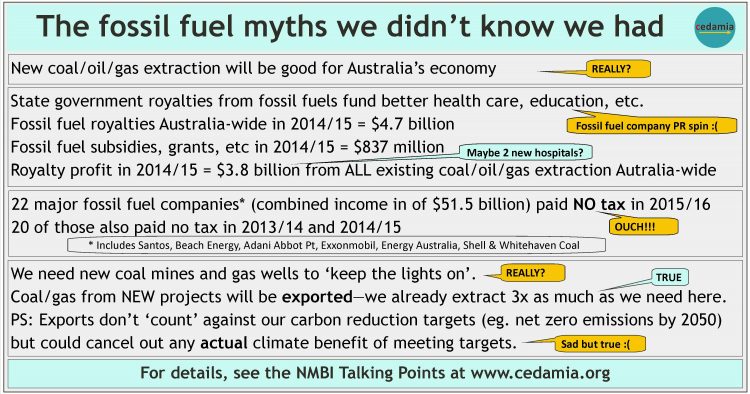 Please help smash the social licence for new fossil fuel extraction projects by sharing the above mythbuster infographic far and wide on Facebook and Twitter. We think even the ‘man in the street’ might view new coal mines and gas wells in a new light if they knew just how little benefit they bring us….although of course they should be banned for climate reasons even if they did make us rich.

NSW: We’re delighted to be partnering with the Australian Forests and Climate Alliance (AFCA) on the NMBI campaign in NSW, particularly since deforestation for wood bio-mass as fuel is currently such a big issue in NSW. If you’d like to help promote the NSW NMBI petition, here are social media links to share:
NSW NMBI Facebook share link – Tweet share link

Queensland: Over 50 Greens candidates and a few others sent back very supportive responses to our candidate survey prior to the 2017 Queensland election. You can see all their responses here.

South Australia: The SA NMBI campaign has been running for a while now but we’d love you to give it boost in the remaining days before the March 17 state election.

Darebin City Council, located in the inner north of Melbourne, resolved on 26th February to set up what we believe will be the world’s first agency dedicated to climate emergency action. The new agency, Climate Emergency Darebin, will be an innovation engine to develop new projects and programs to both take action locally in partnership with the community and to reach out to engage with other Councils and other levels of government (state/territory and national) and internationally.

Climate Emergency Darebin will pursue the creation of a zero emissions economy that also engages in drawing excess CO2 out of the atmosphere on order to contribute to the emergency speed restoration of a cool safe climate. The terms of reference for Climate Emergency Darebin can be found here. The agency will begin operation in mid April this year.

As always, huge thanks to those of you who have signed our petitions, collected hardcopy signatures, and shared our climate emergency campaigns on social media. We couldn’t do anything without you!

Margaret and Philip from the cedamia Climate Emergency Declaration team