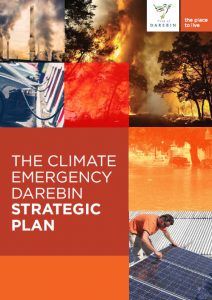 A number of Darebin council candidates signed the Climate Emergency Declaration statement of support prior to the recent Victorian council elections. A majority of the candidates who were elected had signed.

On December the 5th 2016, at their very first meeting and at the urging of local climate groups, the newly elected Councillors passed a motion recognising that we are in a Climate Emergency.

The motion they passed states:

Council recognises that we are in a state of climate emergency that requires urgent action by all levels of government, including by local councils.

On May 29, 2017, Darebin Council made their new Climate Emergency Plan available for public consultation. Then, in August, the plan was officially adopted. Please take a look and consider encouraging your own local council to follow suit!

Reaching out to other local councils

That the MAV recognise that:

(a) we are in a state of climate emergency that requires urgent action by all levels of government, including local councils

(b) human induced climate change stands in the first rank of threats to humans, civilisation and other species

(c) it is still possible to restore a safe climate and prevent most of the anticipated long-term climate impacts – but only if societies across the world adopt an emergency mode of action that can enable the restructuring of the physical economy at the necessary scale and speed;

(d) the MAV has a particular role in assisting local governments in this regard.

On 26th February 2018 Darebin Council voted to set up what we believe will be the world’s first agency dedicated to climate emergency action. The new agency, Climate Emergency Darebin, will be an innovation engine to develop new projects and programs to both take action locally in partnership with the community and to reach out to engage with other Councils and other levels of government (state/territory and national) and internationally.