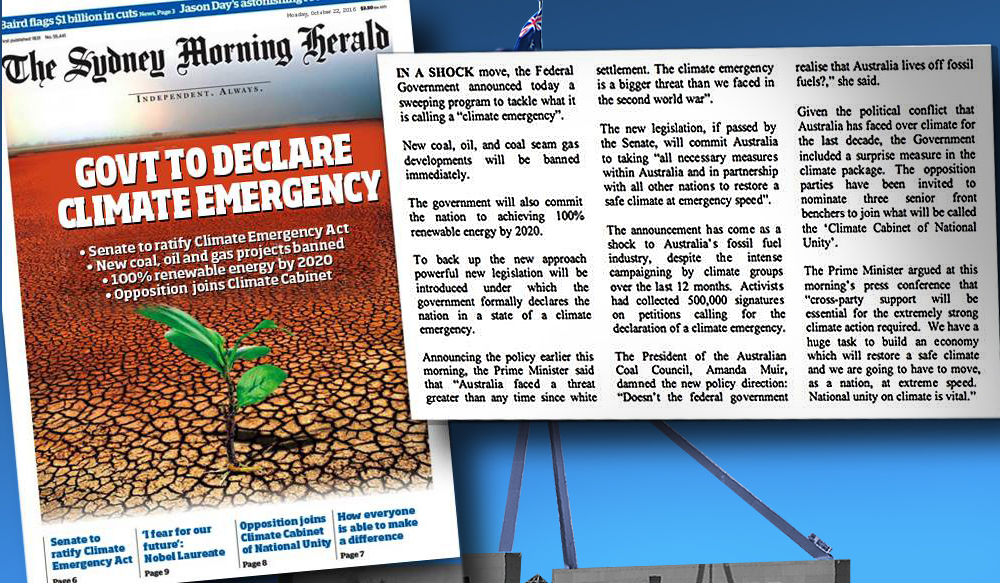 Imagine, it is a few months after the above headline…

How did this happen? The majority of Australians were fed up with the slow pace of climate action and were demanding real protection for all people, species, and ecosystems. The major political parties realised they would need to work together to tackle such a huge existential threat effectively. The government of the day appointed a new national unity Climate Cabinet, comprised of members of all major parties, with a view to declaring a Climate Emergency and committing to an all-out climate mobilisation effort aimed at giving us all a safe future.

The first action of the Climate Cabinet was to introduce legislation enabling a declaration of Climate Emergency. This new legislation, the Climate Emergency (Restructuring & Mobilisation) Act, provided the Australian Government with the legal powers and planning machinery needed to restructure the economy and mobilise resources in order to prevent or limit a general climate and ocean acidification crisis and to urgently restore a safe climate and safe ocean pH. (Reference: Philip Sutton’s Model Act.) 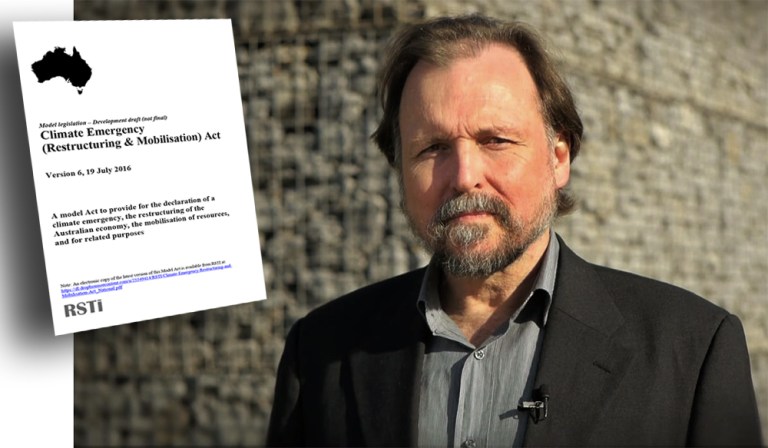 Under this new legislation, the government then declared a Climate Emergency and established the Climate Emergency Restructuring Authority to carry out the strategic planning under the Act, and to drive implementation action.

In practice, much of the required research had been undertaken over the preceding decade, and political parties had already been planning details of the anticipated mobilisation prior to the formation of the Climate Cabinet. This meant that the government was able to spring into action promptly, thus giving them time to demonstrate the success of the climate mobilisation measures before the next election.

Almost immediately the government began an extensive information campaign to explain to the public the need for abandoning business as usual ‘for the duration’ of the emergency, that is, until the economic restructuring was heading in the right direction to achieve the safe climate restoration goals. This campaign encouraged everyone to play a part. It advertised schemes to incentivise emissions elimination measures, reported on actions individuals and communities were taking, and fostered a culture of ‘everyone is doing their bit’ for the sake of a shared benefit.

New federal policy measures enacted immediately after passage of the emergency declaration included:
• a ban on all new coal, oil, and gas projects and a ban on expansion of existing ones
• a ban on logging native forests
• electricity market reform, including the addition of climate mitigation as a top priority in the national electricity market objectives
• a prohibition on any projects causing degradation of existing carbon sinks
• high energy efficiency standards for new buildings and appliances.

A rapid but well-planned and orderly roll-out of renewable electricity generation and a corresponding staged closure of existing fossil-fuel generators commenced, with just transition programs offered to affected workers.

A phase out of fossil fuel exports also began, along with development of renewable energy and clean-tech exports to replace the export income.

A huge amount of the groundwork was carried out prior to the formation of the Climate Cabinet, and in fact this was necessary in order to ensure a smooth and successful roll-out of the emergency mobilisation policies.

The above is one vision – what we think we need sometime very soon. See below for the groundwork already underway and what is needed next for this vision to become reality.


The first requirement: a mind shift

Despite decades of climate warnings from scientists, and climate impacts that are already killing people and ecosystems at a little over 1°C warming, too many of us seem strangely resigned to governments not acting to protect us. We tend to think ‘business as usual’ is more powerful than governments, and that politicians who go ‘too far’ with climate initiatives won’t be re-elected.

But our lives are at stake. Who really wants to sit back and watch in resigned horror as humanity heads over a cliff? 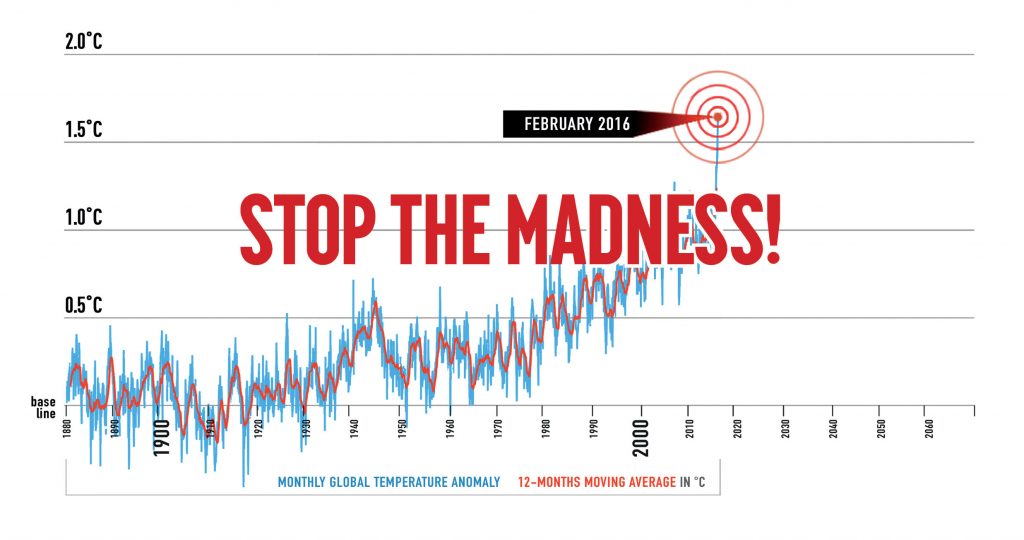 The February 2016 spike in global average temperatures was a whopping 1.57°C degrees above the 1880-1909 baseline, making it the warmest month in recorded history. This prompted the launch of the Climate Emergency Declaration and Mobilisation campaign and the mind shift towards saying we are already in an emergency and that we will no longer settle for ineffective climate action.

The campaign is a call to action with a focus on how to achieve effective protection for all people, species and ecosystems. Rather than just saying we are in an emergency, it paints a picture of what governments and the people can do to achieve a safe future, and how the public can and does collectively rise to the occasion when in emergency mode.

We already know most of what we need to do to restore a safe climate. We have the technology and even the money to do it. We just need to make the call for a climate emergency declaration and mobilisation into ‘a thing’ – a familiar possibility that the public can imagine and demand. At its core is a mind shift towards recognising that current government policies are needlessly and knowingly putting us all in peril, and that we deserve better. It is perfectly reasonable for us to demand full-scale effective action since nothing less will achieve a safe future.

There is a long way to go before the required mind shift spreads to a majority of the population, but already the emergency declaration and climate mobilisation concept is starting to become ‘a thing’.

In the first year of the campaign over 18,000 people from all walks of life signed emergency declaration petitions, and use of the expression ‘climate emergency’ has become more common. A number of federal, state, and local government elected representatives and a pleasing number of other eminent people signed statements of support. Around 50 grassroots groups, several state peak environment bodies, and the Sustainable Engineers Society joined in the campaign.

A shift from single-issue campaigning began with the realisation that successfully stopping one ‘bad’ project would not stop an endless stream of similar proposals elsewhere. A successful campaign for comprehensive climate mobilisation measures would include stopping all new climate-damaging projects and would automatically achieve a win for all the current campaigns aimed at stopping specific coal, oil, and gas projects. 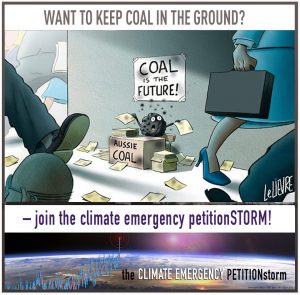 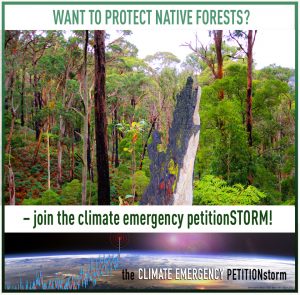 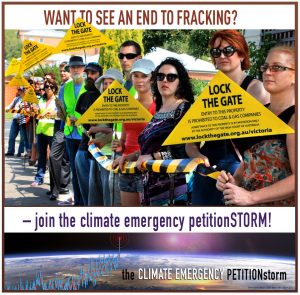 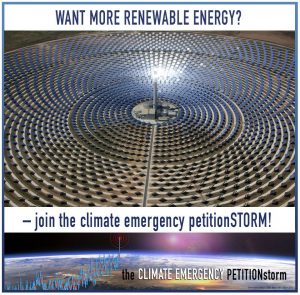 A number of MPs have signed statements of support, and we are encouraging members of political parties to begin branch-level resolutions in support of a Climate Emergency declaration and mobilisation position.

State and territory governments have primary control over the types of projects approved within their own jurisdiction. As a first step in climate emergency action, they could relatively easily ban new climate-damaging projects (coal, oil, gas, etc). The No New Bad Investments (NMBI) model legislation drafted by EJA would enable immediate bans in cases where climate-safe alternatives are already available, and would set strategies and timelines for the transformation of all other climate-damaging economic streams.

So far NMBI campaigns have been launched in SA, Queensland, Victoria, NSW, and Tasmania and there is an offshore NMBI petition calling for a ban on new oil and gas projects in Commonwealth waters. The aim is for one or more states/territories to achieve some major climate mobilisation wins early on to show what is possible. The various NMBI petitions, talking points, and action kits can be found here.

What is needed next to make a national Climate Emergency Declaration a reality?

Key things we need to achieve over the next couple of years include:

• Successful initiation of local-level climate mobilisations by at least some local councils in each state and the Northern Territory, and leadership from local councils to gain state, territory, and national government declarations of Climate Emergency

• At least some states/territories adopting either full-scale emergency declaration and climate mobilisation legislation or No More Bad Investments legislation.