Talk to local Councillors and council candidates about what local councils can do to tackle the climate emergency. It turns out a surprising amount can be achieved, and is already being achieved, at the local government level.

We want Councillors at every single local council in Australia to receive a visit and have a conversation with local Climate Emergency Declaration campaigners. But first please take a look at the Local Government page to see what is already happening.

The ultimate aim is a national declaration of Climate Emergency with its ability to unlock all the required policy changes and funds for a rapid climate emergency response, but local councils can start the ball rolling by demonstrating successful climate emergency initiatives at the local level. Early successes in their own local community can then spread outwards to other local council areas and upwards to the state/territory and federal levels.

For an in-depth discussion of the local government campaign, initially in the Darebin Council area but spreading to other areas, see the Council Action in the Climate Emergency (CACE) website.

You know your own local council and Councillors, so you are in the best position to decide what to talk about, but the ideas below might help you plan your conversations.

Listen to Darebin Councillor Trent McCarthy giving inspiration and great tips for getting your local council on side.

For Councillors who already support the Climate Emergency Declaration campaign:

– Talk about the potential role of local councils in building a nationwide climate emergency response
– Tell them about the actions taken so far by the Darebin City Council. See the Local Government page for details.
– Take them a copy of the Darebin Climate Emergency Plan
– Discuss ways you or your local group could help build support amongst your other local Councillors and community

For Councillors not yet familiar with the Climate Emergency Declaration campaign:

– Explain the campaign vision and the amount of support generated so far (number of signatures, support from eminent people including other councillors and mayors, etc.) See the Supporters page for examples.
– Talk about the potential role of local councils in building a nationwide climate emergency response
– Ask them to sign the Statement of Support below and publicise it on social media 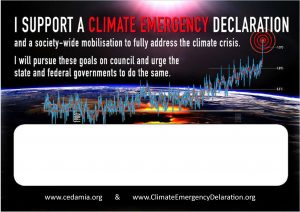 For Councillors who don’t yet regard climate as an emergency:

– Take along some material indicating the urgency of taking climate action and some examples of actions taken by local governments elsewhere
– Talk about the actions being taken by the Darebin City Council. See the Local Government page for details.
– Talk about the amount of support generated so far for the Climate Emergency Declaration campaign (number of signatures, support from eminent people including other councillors and mayors, etc.) See the Supporters page for examples.

For further tips see an in-depth discussion on the CACE – Council Action in the Climate Emergency website on how to approach a meeting with your local councillor.

– Download, print, and take along the Council Candidate Statement of Support below. Ask them to sign it, take a photo of them holding it up, and publicise it in social media posts. 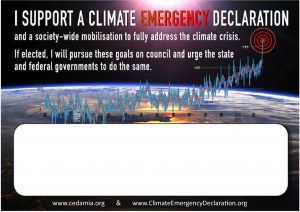 Click here – or right-click on the image – to download the A4 sheet for council sign-on (PDF document).