This page focuses on declaring a Climate Emergency at the local council level. For a good explanation of what a national Climate Emergency Declaration would look like, see What does “climate emergency” mean? by Ian Dunlop and David Spratt. Also available in French here. 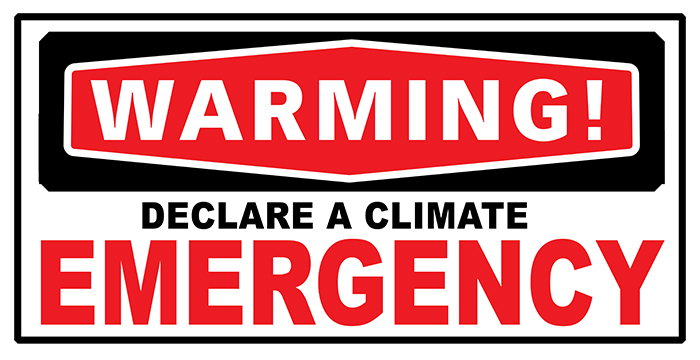 Why declare a Climate Emergency?

A Climate Emergency declaration issued by a body in authority, such as a government or local council, can be a powerful catalyst for community-wide action if paired with a clear action plan.

People expect an emergency announcement when there is a life-threatening situation, and will hesitate to take any action themselves if nobody else appears to be taking the threat seriously. Think of a fire alarm. People might initially think it is just a drill, and will ignore it if everyone else does. But as soon as someone who is considered to be a leader says the fire is indeed real and points out the safest exit to use, everyone will drop what they are doing and evacuate.

The sections in italic below are quotes from Leading the Public into Emergency Mode, by psychologist Margaret Klein Salamon PhD, founder of The Climate Mobilization in the US. She uses the term ’emergency mode’ to refer to the flow state in which people temporarily set aside business-as-usual and focus intently on determining the safest course of action and doing whatever is required, right now, to deal effectively with a threat.

To evaluate whether we are currently in a climate crisis, the public will look to each other — and particularly to the climate organizations, writers, and leaders. Are they calling it an emergency? Does the tone of their writing and statements convey alarm and a passionate desire for massive action to avert imminent crisis? Are they demanding an emergency response? Are they acting like it’s an emergency? Are they themselves in emergency mode? If the answer to these questions is “no,” the individual will conclude that there must not be an emergency, or that emergency action is hopeless because the leaders are apparently unwilling to coordinate emergency action. [underlininig added]

If people don’t know what to do during an emergency, they may panic, despair, or resist going into emergency mode at all.

The more the climate movement can provide structures for people’s engagement — clear directions and support for people who are ready to tackle the climate emergency — the more people will go into emergency mode.

Thousands of School Strikers and many others in the community are already feeling very afraid about their climate future. For those people the scariest thing is that the government bodies that have the most power to make the necessary big changes appear to be ignoring that there is a climate emergency and pursuing policies that put us all at even greater peril.

Our political system seems intractable, the culture in the thrall of denial, and the scale of the crisis is staggering. Widespread feelings of helplessness also represent the failure of leadership from official climate movement leaders and politicians to offer an honest assessment of the crisis, advocate for solutions that actually stand a chance of working, and invite individuals to take part in that solution. [underlininig added]

The current global wave of local councils declaring a Climate Emergency is finally providing an element of hope and an action pathway, thereby channelling the energy, focus, and resources of their communities towards resolving the emergency and restoring safety.

Emergency Threat. In order to lead people into emergency mode, it is critical that the emergency threat is paired with an emergency solution.

Affect Phobia. Columbia University’s popular CRED Guide to Climate Communications contains a section, “Beware the Overuse of Emotional Appeals,” in which they caution presenters to avoid telling the whole truth about the climate crisis, as this would cause “emotional numbing.”

Emergency Solution. When the scale of the necessary response to the climate crisis is minimized, it prevents people from entering emergency mode

Yes, some people may ‘switch off’ if a council declares a Climate Emergency, but others will ‘switch on’. We won’t get the action and outcome we need if we don’t dare acknowledge the scale of the problem, and dare to advocate for implementation of solutions at the necessary scale and speed. As Bill McKibben says, winning too slowly is the same as losing.

We have found that most people express profound relief when we ask them to sign our Climate Emergency Declaration petition. They say things like, ‘Finally! It’s so good to see someone telling it like it is and advocating the sort of massive urgent action we need’.

Salamon talks about emergency mode being ‘contagious’. We have seen that in the recent rapid global increase in the number of local councils declaring a Climate Emergency. But it is perhaps significant that the most rapid growth has occurred only since the IPCC Special Report in October 2018. The truly grim facts presented in that report understandably caused a heightened sense of fear, but instead of producing paralysis, that fear has given rise to an unprecedented wave of School Strikers and over 200 new Extinction Rebellion groups, all demanding urgent action…and one of the things they are demanding is for local councils to declare a Climate Emergency (possibly because that is the one level of government that so far seems to ‘get it’).

Some local councils already have relatively ambitious climate action plans, and at least one UK council rejected a motion to declare a Climate Emergency on the grounds that they are already ‘doing enough’. But even if a council is already doing everything they possibly can in practical terms, they can achieve a lot more by also declaring a Climate Emergency and lobbying their state and national governments for the big changes only they can make. It will empower their communities, encourage other councils to follow suit, and generally help all of us treat the climate crisis as the existential emergency that it is.