Perhaps the biggest challenge in stopping new fossil fuel projects is breaking the commonly held myths that suggest we need NEW fossil fuel extraction and infrastructure to keep Australia prosperous and ‘keep the lights on’. In practice, as shown in the LNG and Coal Exports page and the States Can analysis, there is surprisingly little economic benefit and little domestic need to continue to allow NEW fossil fuel projects.

Please help break the myths below, in conversation, on social media, or whenever you get a chance. One easy way is to help break these fossil fuel myths is to share the Facebook and Twitter links given in the sections below. Also, share States Can on Facebook. 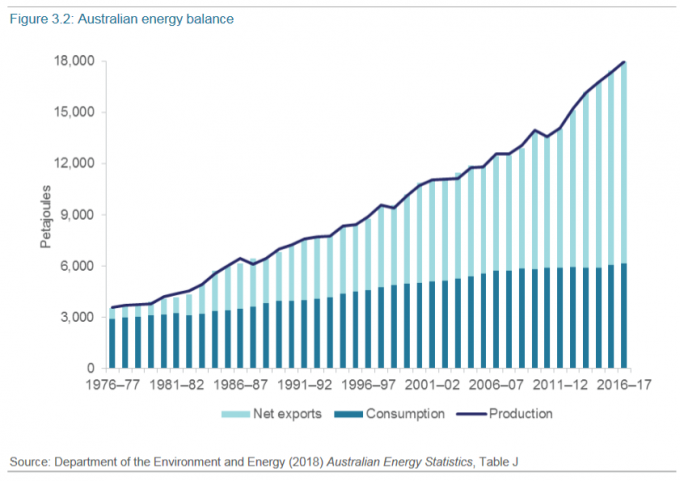 Myth 2: It is up to the federal government to stop new fossil fuel projects

Even if Queensland considers it needs new coal mines to meet electricity generation demand, it could pass a bill banning all new coal mining for export, as proposed by Michael Berkman MP in October 2018. This would effectively stop the proposed Adani coal mine and all other new coal mines in the Galilee Basin without the need for federal intervention.

Myth 3: Australia has a gas shortage

A: Use of gas for electricity generation has been falling (orange band labelled GPG in the chart below) and Australia has enough conventional gas reserves to meet domestic demand (east coast and SA) for the next 64 years. However the Australian gas cartel has been restricting supply to the domestic market in order to meet their overseas export contracts and forcing up the price. See Bruce Robertson, The Risks Mount.

Even so, WA has a gas reservation mechanism, SA attached a condition that SA has first call on the gas when it gave subsidies for new gas wells in 2017, and Queensland is starting to do the same with new exploration permits. There is also a federal measure, the Australian Domestic Gas Security Mechanism (ADGSM), which can be triggered if necessary to guarantee domestic supply.

A1: In November 2018 the head of the International Energy Agency said, ‘We have no room to build anything that emits CO2 emissions’ (reported here). Even if gas-fired electricity is assumed to have lower emissions than coal-fired generation, it is counter-productive to lock in gas use when renewable electricity is cheaper and has much lower greenhouse gas emissions.

A2: LNG production produces enormous amounts of greenhouse gas emissions before it is exported, and transportation and regasification adds on more. Roughly 9% of the gas feedstock is used up in the liquefaction process, and gas-fired electricity used in the processing adds on more carbon emissions. (See Australian Energy Statistics.) 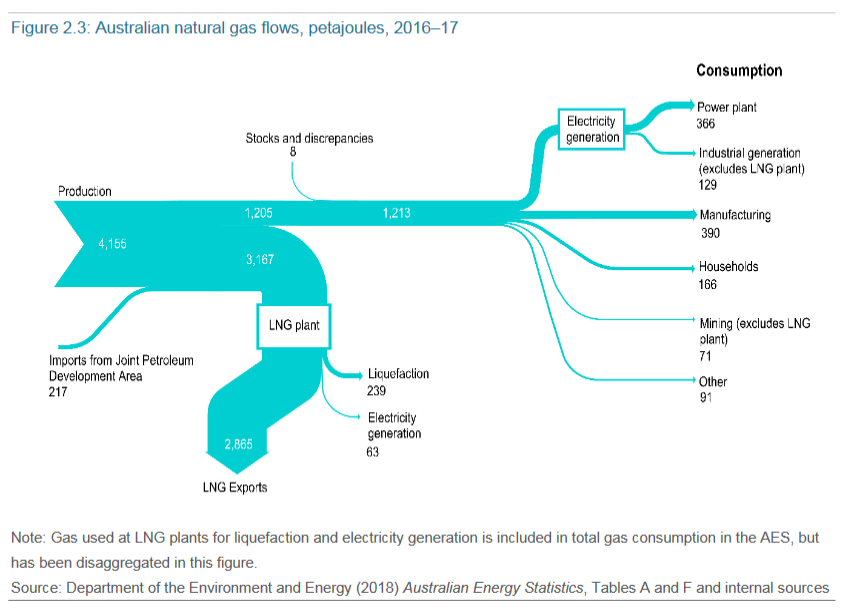 Conventional gas fields in Western Australia and the Northern Territory contain quite large concentrations of CO2 in raw gas, almost all of which must be separated out before the gas can be liquefied. Millions of tonnes of CO2, mixed with considerable volumes of methane, are being released directly into the atmosphere.

The 4.4 MT rise in stationary energy (excluding electricity) emissions in the table below is largely caused by LNG liquefaction. Much of the 6.9 MT increase in fugitive emissions is also attributed to the LNG industry, and includes leakage, evaporation and storage losses, flaring, and venting of CO2, CH4 and N2O. Together those increases more than wipe out the benefit of the 8.1 MT decrease in emissions from the electricity sector. 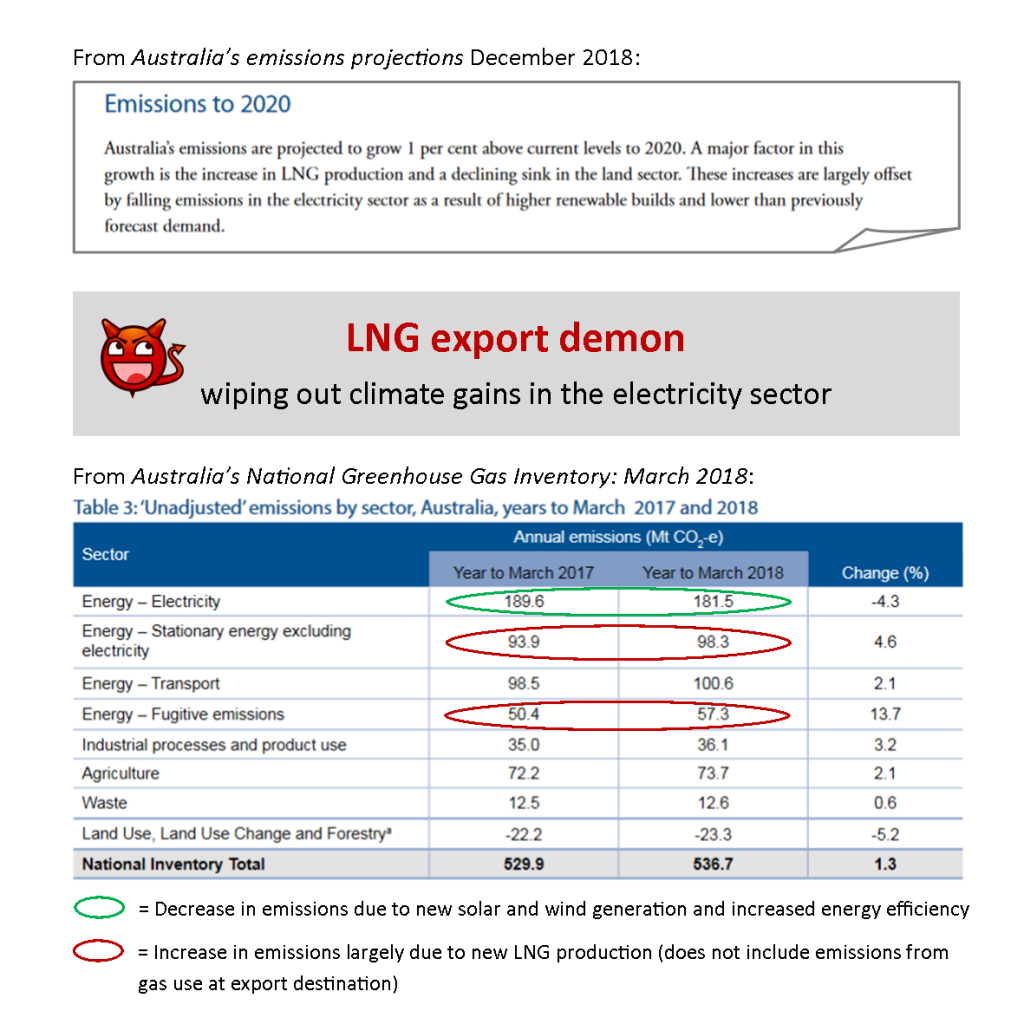 A: December 2018 APPEA media release said that “Australia’s LNG export earnings increased 36 per cent to $31.7 billion in 2017-18 and are forecast to reach $48.4 billion in 2018-19”. What they should have said is that LNG export companies earn billions, not Australia. According to ATO corporate transparency data, so far none of the LNG export companies have paid any income tax or Petroleum Resource Rent Tax (PRRT). In 2016-17 gas royalties paid to Queensland were only $98 million, and no royalties are paid on offshore gas exported as LNG.

Myth 6: Gas appliances are cheaper and ‘greener’ than having an all-electric home

A: This is a hard myth to break because up until a decade or so ago this was ‘common knowledge’, particularly since there wasn’t much awareness of fugitive emissions, and the gas industry still heavily promotes the ‘gas is better’ myth.

But a lot has changed over the last 10 years. Gas was cheap, but gas prices have more than doubled since LNG exports began. Electric heating, cooking, and hot water appliances were generally quite inefficient but now very efficient reverse-cycle heating/cooling, induction cooktops, and heat pump or solar hot water are now available. Grid electricity was almost entirely generated from fossil fuels, but solar and wind generation are now expanding in all parts of Australia, with ACT and Tasmania close to 100% already and SA due to reach net 100% by around 2025.

Myth 7: Coal and gas are necessary for industrial processes

A: In Australia smelting has been the main use of coal apart from electricity generation. However, Sanjeev Gupta will be using renewable electricity to recycle scrap metal feedstock at his Whyalla steelworks. Conventional steel production from iron ore requires coal, but steel can also be made without coal by using hydrogen (produced via electrolysis of water using renewable electricity) or sustainably produced biomass as the reductant.

For heat processes, electricity is a remarkably versatile and precise form of energy that can be used instead of gas to power any industrial heat process, and there is no practical temperature limit to electrical heat. (See Electrifying Industry.)

Gas is used in the manufacture of fertilisers, but renewable electricity can be used to generate hydrogen (via electrolysis of water) to make ‘green’ ammonia as is being demonstrated at Pt Lincoln in SA.

A: That is true to an extent, but state income from royalties is much less than implied by fossil fuel industry hype. Some royalty figures can be found in state budget reports but they are hard to find. The table below gives an indication (bearing in mind that one major new hospital costs around $2 billion).

*1: The figure shown as the NSW ‘gas + oil’ royalty amount is from 2015-16 and is actually the figure for all NSW royalties other than coal.

But even that is not the whole story, since state governments often also pay subsidies to fossil fuel projects. For example, SA receives around $25 million/year in gas royalties, but in 2017 they paid a total of $48 million in subsidies for new gas extraction projects. In the six years from 2010-2016, the Queensland government received an average of $1.94 billion/year in coal royalties. But between 2008 and 2014 they spent an average of $1.27 billion/year on coal subsidies, mainly for coal railways. (See Mining the age of entitlement.)

Myth 9: We need more coal/gas-fired power stations to keep the lights on

A: These days it is cheaper to build new solar, wind, and storage than it is to build new coal/gas-fired power stations. Modern fast-start gas-fired power stations are indeed useful for filling the gaps between intermittent solar and wind generation, but the ones we already have currently run at much less than full capacity. The lower dark-grey line in the chart below shows the capacity factors for gas-fired power generators in AEMO regions (eastern states plus SA) in mid-winter. Capacity factors are similar in mid-summer, but generally lower in Spring and Autumn. SA is much more heavily dependent than the eastern states on gas-fired power generation, but even there the capacity figure rarely reaches 50%. 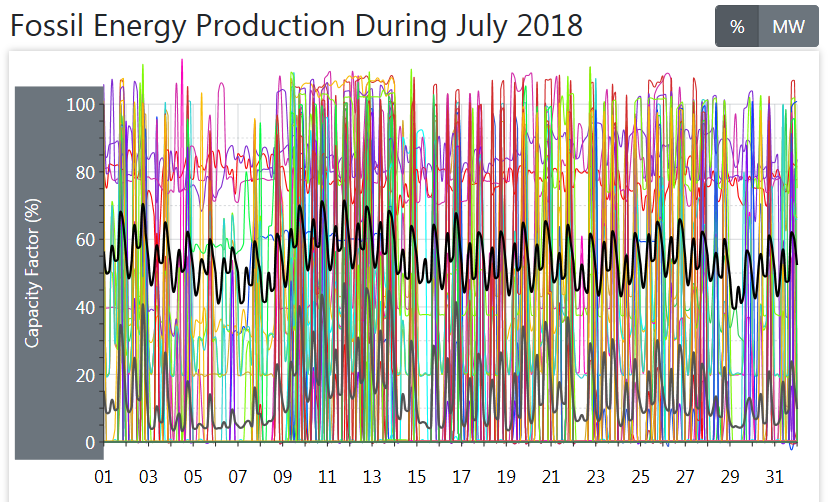 With appropriate planning of renewable energy zones, storage, and transmission lines Australia could reach 100% renewable electricity by 2030. Renewable generation installation has accelerated to such an extent it is on track to provide almost 80 per cent of the electricity market by 2030 even without special planning. (See ABC News October 2018.)

Myth 10: Stopping new coal mines would be bad for the economy

A: Economic modelling published in Never gonna dig you up! by The Australia Institute and Victoria University’s Centre of Policy Studies (CoPS) shows that the economic impacts of a moratorium on new coal mines and expansion of existing ones — on Queensland, New South Wales and Australia more broadly — would be small.

The coal industry employs less than 0.4% of the Australian workforce and its royalties
contribute just 2% of revenue to the NSW and Queensland budgets. A moratorium on building new coal mines and expanding existing ones would allow for a gradual phase out of the industry, which would in turn minimise the social and economic adjustment associated with worldwide commitments to reduce greenhouse gas emissions.

Australian economic growth is barely affected by a moratorium on new coal mines, with a difference in GDP in 2040 of 0.6% between the two modelled scenarios (“business as usual”, wherein no moratorium is imposed, and a scenario where the moratorium goes ahead). 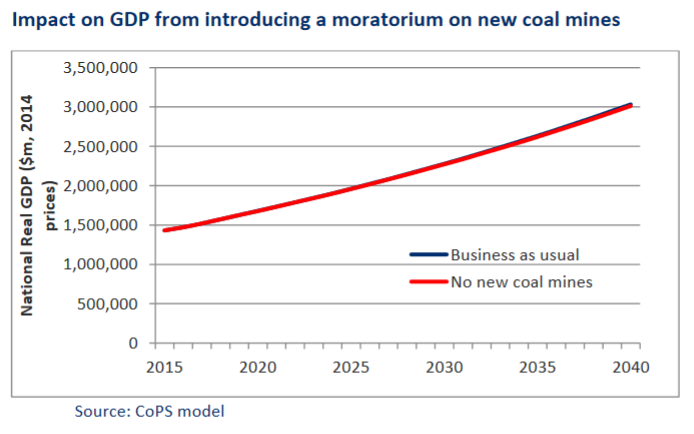