We invite other groups to also launch their own climate emergency declaration petitions as part of a petitionSTORM of similar petitions to be submitted together.

The details of the petitions vary, but they all ask governments to declare a climate emergency and mobilise resources accordingly.

Climate Emergency Declaration petition to ALL levels of government


People who have already signed one of the petitions to the federal government should also sign this petition addressed to all levels of government since various climate emergency action programs can be implemented at other levels of government. This petition replaces the federal petition with actions data, but your signatures from that petition are preserved in the cumulative national signature count. The national count in the above table is adjusted so that your signature is not double-counted in the national signature count.

This petition can be embedded on any number of websites, and currently can be signed at the following places:

Federal petition with actions data
NOTE: This petition has been largely replaced by the 3-level of government petition above, but it is still embedded on some websites and is archived on this website. The signatures collected via this petition form part of the overall federal government signature count.

People who sign this petition also answer a few quick questions about how they reduce their carbon emissions. This is for demonstrating how individuals are mobilising, and builds awareness that ‘everyone is doing it’. This petition can be embedded on any number of websites, and currently can be signed at the following places:

The chart below shows what others who have signed either the 3-levels of government petition (above) or the federal petition with actions data have reported so far:

*: The ‘Promote CED campaign’ action only has a few results so far because it is a recent addition to this list of actions.

Conservation SA petition
This petition targets state parliaments as well as the federal parliament, so please sign this one even if you have already signed one of the above petitions. It can be signed at the following site:

BCCAG petition
This emergency declaration petition launched by the Bayside Climate Change Action Group targets the federal and state parliaments. It can be signed at the following: 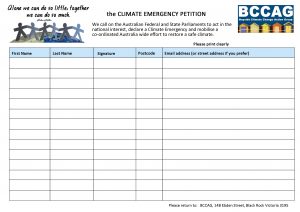 Significance of a Climate Emergency Declaration

Declaring a climate emergency and acting on it is a top-level ask that fundamentally encompasses many of the asks climate-motivated people in Australia are currently campaigning on. If we win this ask and it is implemented properly, then this would stop new coal, oil, and gas projects, and existing ones would be phased out. Dirty power stations would be closed down as part of an orderly transition to 100% renewable energy. Energy efficiency would thrive, forests would be regenerated, habitats would be protected, air pollution health effects would vanish, public transport, cycling and EV’s would flourish, and even the Great Barrier Reef might stand a chance of regenerating. 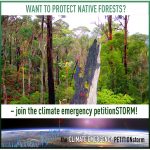 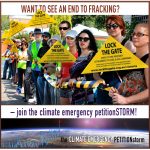 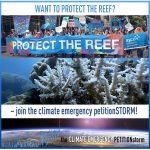 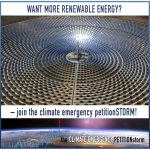 Start your own petition


If your group launches your own Climate Emergency Declaration petition, chances are you’ll word it your way to reflect your core focus. To be part of the petitionSTORM, it simply needs to share the same top-level climate emergency declaration ask.

It’s much like a climate march, where different groups march together for a common top-level ask of climate action despite having different concerns and messages.

The only requirement is that the petitions involved in the petitionSTORM include words to the effect that:

If you are launching your own petition, please let us know so we can plan joint delivery as a petitionSTORM as soon as the overall number of signatures is high enough. Or, if you like the existing petitions and your group would prefer to simply help promote one of them, please let us know.

If your group likes the 3-level of government petition at cedamia.org/sign, it can be embedded in your group’s website, if you wish, either with or without the surrounding context. It has a centralised Google Drive mechanism that automatically takes care of recording signatures and updating counters at all sites where it is embedded. The WordPress code for embedding the petition is available from info@cedamia.org.