On 5 December 2016, Darebin City Council in Victoria, Australia, became the first jurisdiction anywhere in the world to declare a Climate Emergency. Four years later the global count sits at 1,854 jurisdictions in 33 countries. The vast majority (1,807) of the declarations have been by local government bodies such as municipal councils, but 32 were adopted by subnational regional or state governments, 14 by national governments, and one by the European Union (November 2019). 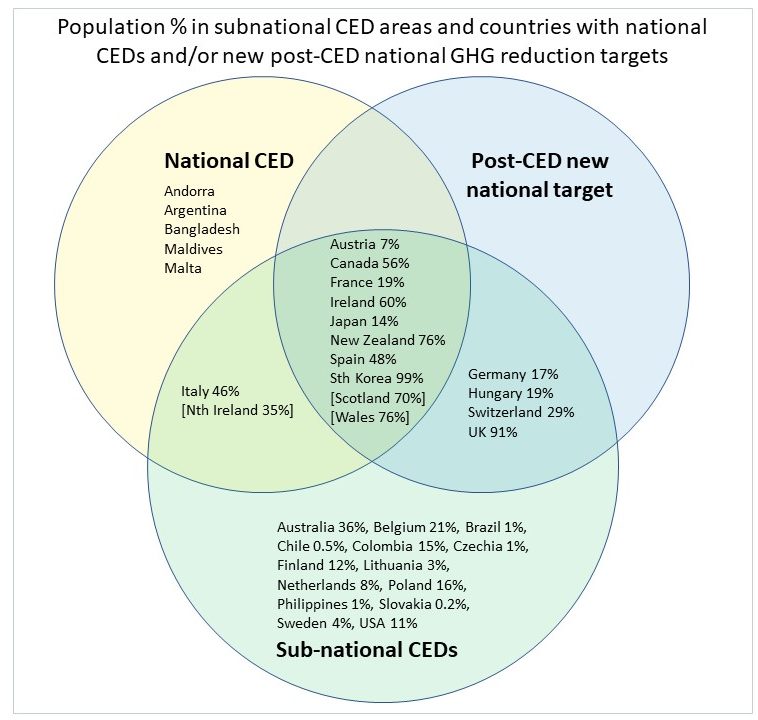 * Note: The statistics in this article are accurate to the best of our knowledge at the time of writing, but we rely heavily on English language media for news of new declarations and declarations in other language regions are probably under-reported. Please email info@cedamia.org if you know of declarations we have missed in the list at https://www.cedamia.org/global.

Ireland was the first country to declare a Climate Emergency at the national level in May 2019, followed by Canada, Argentina, Spain, Austria, France, Malta, Bangladesh, and Italy, then in early 2020 by Andorra and Maldives, and in late 2020 by South Korea and Japan. Of those, Argentina, Malta, Bangladesh, Andorra, Maldives only have their national-level and no subnational declarations (as far as we know). 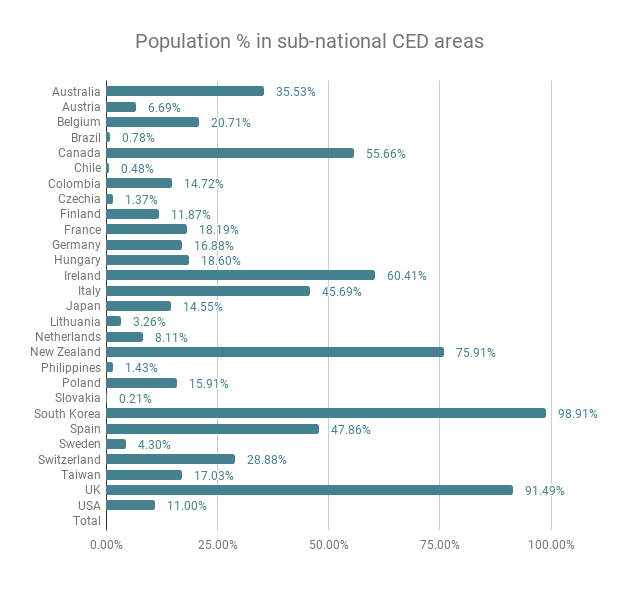 But everything changed with the IPCC 1.5 Degree Special Report in October 2018. That triggered the first UK declaration by Bristol City Council on 13 November 2018, and that in turn sparked off a very rapid proliferation of new declarations in 2019, initially within UK and then throughout Europe. During 2020 the most active region has been Asia, with South Korea suddenly overtaking most other countries in terms of the number of jurisdictions making declarations when all except two local councils adopted a Climate Emergency Declaration on 5 June 2020. In Japan 44 jurisdictions, including Tokyo just yesterday, have declared a Climate Emergency, and Taiwan had its first two local government declarations in November 2020. 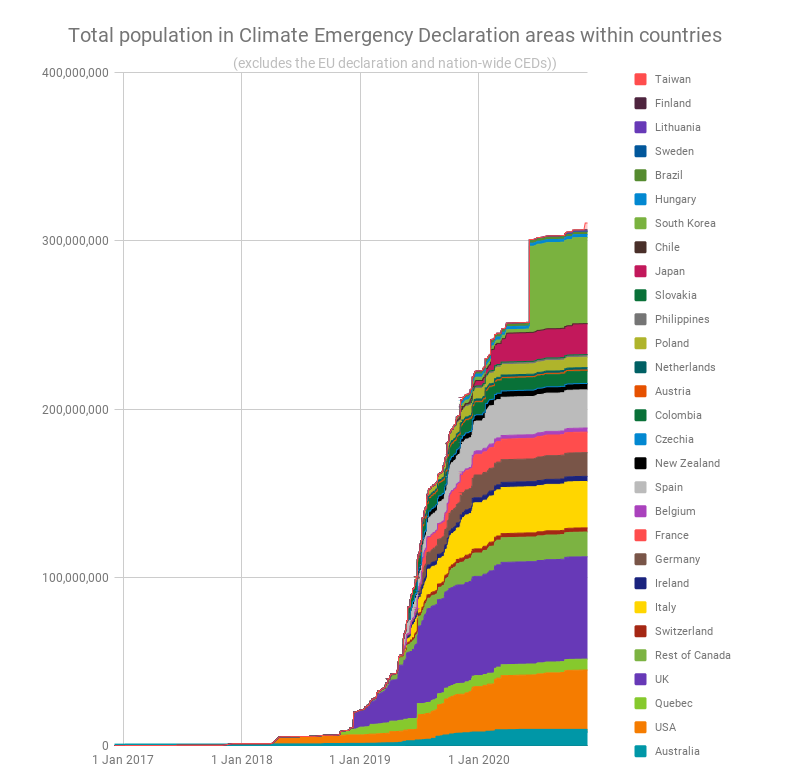 Many countries do not yet have any known climate emergency declarations, and currently the greatest concentration is in Europe, but even so there are at least some declarations scattered across much of the globe. Details of each declaration can be seen by clicking the markers on cedamia’s global map at https://www.cedamia.org/global-ced-maps. 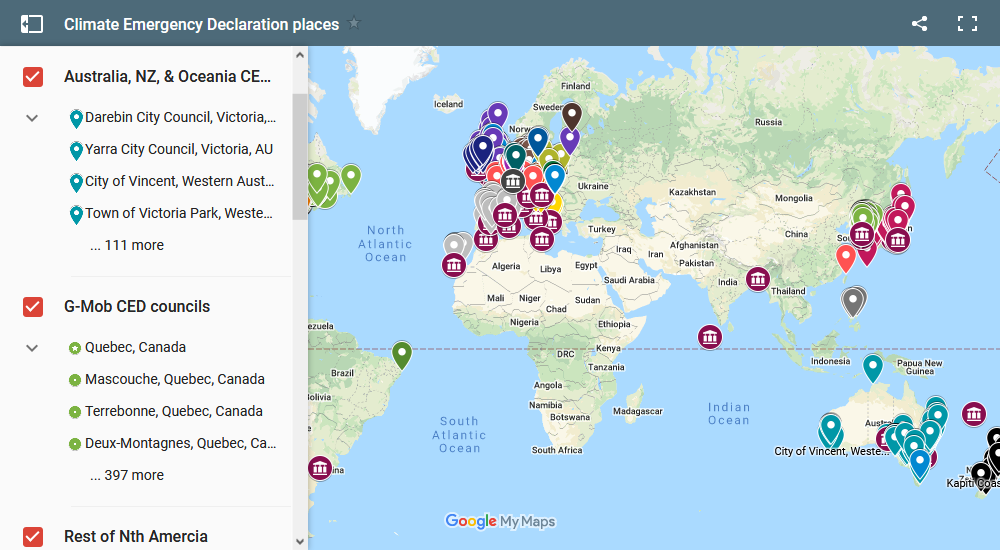 Jurisdictions range from the smallest town and parish councils up to major cities like London, New York, Paris, Rome, Sydney, and Tokyo. The 32 regional/state governments include Scotland, Wales, Gibraltar, Quebec, and Northern Ireland. Five of Spain’s 17 regions have declared a Climate Emergency, as have seven regions in Italy, six cantons in Switzerland, and the Australian Capital Territory. 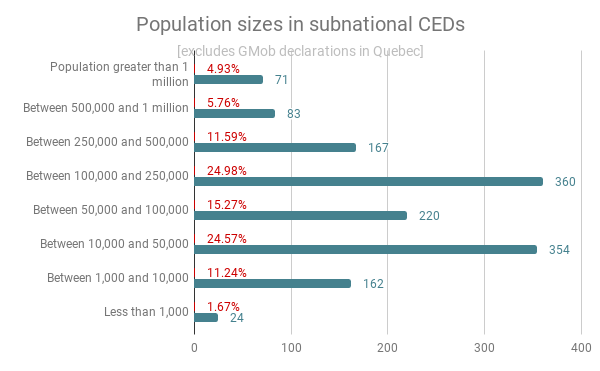 In Australia there have been 97 declarations so far, including by five of our seven capital cities: Adelaide, Darwin, Hobart, Melbourne, and Sydney. 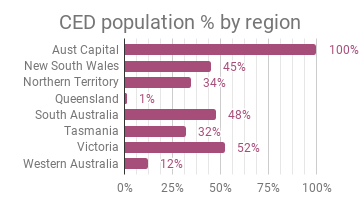 An astonishing number of news articles reporting new Climate Emergency Declarations refer to them as being ‘symbolic’.
According to a recent news article on the New Zealand declaration, ‘The declaration comes without any newly assigned statutory powers or money, making it purely symbolic.’ But Jacinda Adhern clearly indicated the declaration was a commitment to action, including a new initiative requiring public agencies to be carbon neutral by 2025.

It takes time to develop the most effective course of action and determine the best way of allocating budget, but climate is already an emergency. During an emergency it makes no sense to remain silent about it and to delay emergency declarations until all action plans are in place. That public signal is vital, along with the public commitment to respond to the emergency. This is particularly so when public cooperation and voluntary effort are essential in order to reduce loss of life.

Many local council declarations include a commitment to developing a climate emergency action plan within a specified timeframe, some set carbon neutral target dates, some set a principle of considering the climate impact of all future council decisions, and all indicate at least some sort of commitment to responding to the emergency.

However, when critics say Climate Emergency Declarations are symbolic they tend to imply that they are empty words. But even if that were true the tsunami of new declarations from all levels of government over the last two years has firmly established ‘declaring a climate emergency’ as a widely known possibility rather than a fringe idea. Since mid-2019 the Guardian style guide has been encouraging use of ‘climate emergency’ rather than weaker terms, and ‘climate emergency’ was selected as the Oxford English Dictionary word of the year in 2019. No declarations could occur until the idea of doing so was conceived, and very few occurred until the concept built its own momentum.

Certainly the campaigners urging their respective jurisdictions to declare a Climate Emergency are not asking for an empty symbolic gesture. They are expecting urgent effective action at a scale and speed commensurate with the existential threat we face, and are quick to criticise any jurisdiction that fails to take as much action as they expect.

With over 1800 declarations it is easy to imagine significant variation in terms of follow-up actions, including some cases where the declarations might ultimately prove to be empty words, but a search of council websites reveals plenty of evidence that many local governments are making serious attempts to match their actions to the words.

A number have set new carbon neutrality targets for their own operations and for their entire communities. The cedamia data sheet does not yet have comprehensive data on targets for all jurisdictions, but the charts below show the data collected so far concerning community-wide targets. 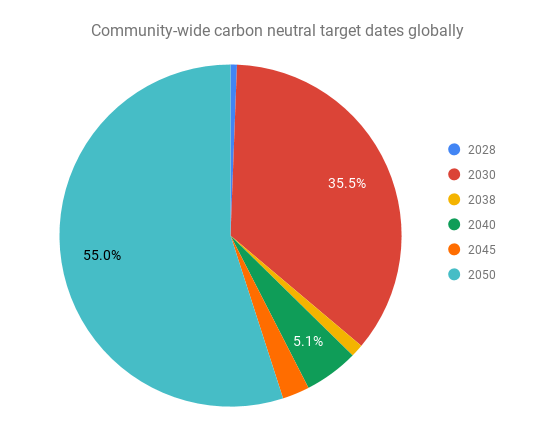 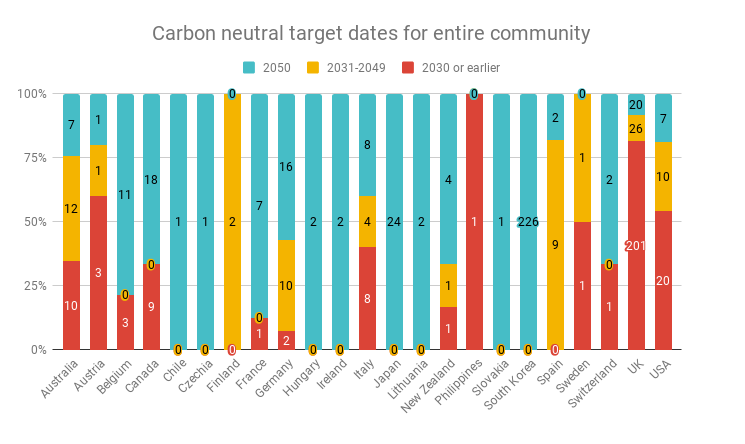 Targets are known for 247 UK councils. Of those, 201 areas with a combined population of 35 million people have a 2030 or earlier carbon neutrality target date set by their council for their entire community.

The national trajectory adopted by the UK is to reach carbon neutrality by 2050. If the above 35 million people simply adhere to the national target, by 2050 their cumulative GHG emissions would be close to 4 billion tonnes of CO2 equivalent. If instead they manage to achieve the 2030 target adopted by their local council, they will reduce that amount by around 2.5 billion tonnes. 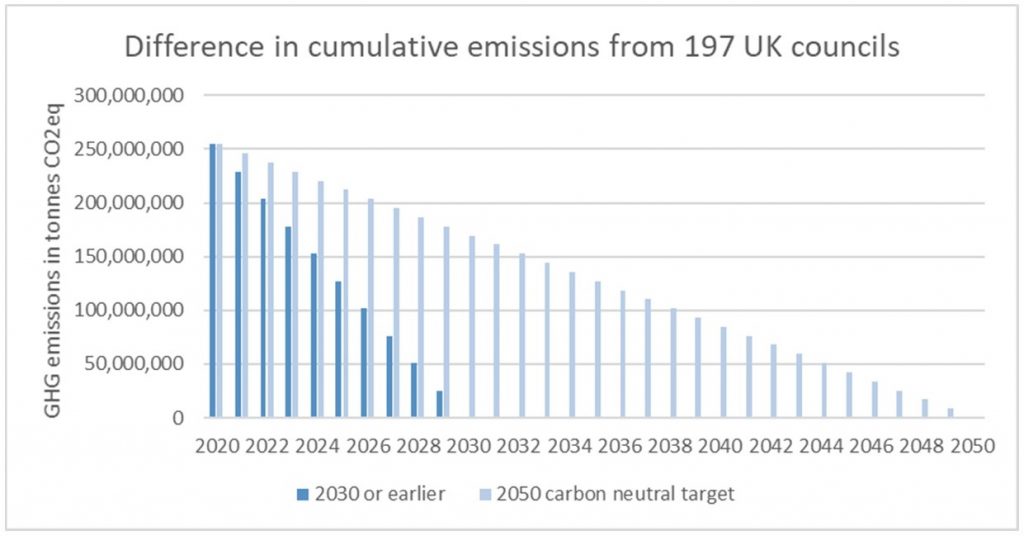 The cedamia data sheet does not yet have comprehensive data on climate emergency action plans, but it includes links to 178 action plans from UK local councils that have declared a Climate Emergency and 29 from Australian councils.

The level of ambition varies, but typical actions include measuring current levels of GHG emissions and setting targets for reducing the emissions from council’s own operations and also those of the wider community, mapping out a costed action program to address emissions from buildings, transport, consumption, waste, and land use, and hiring extra staff or consulting experts to plan the most effective measures. Community engagement is a key feature in many cases, with the community either helping to draw up the action plans or being invited to give feedback on draft plans.

3. Are there legal implications?

This question has vexed many local governments and possibly prevented some from declaring a Climate Emergency. There are legal implications associated with declaring more familiar natural disaster or health emergencies, with associated ’emergency’ powers to allocate budget, mobilise resources to take specific counter-measures, and impose temporary restrictions on usual behaviour for the duration of the emergency.

Some Councillors have therefore wondered if declaring a Climate Emergency would expose them to legal obligations to take particular actions, and that uncertainty has given rise to various strategies. Some councils have chosen to ‘recognise’ or ‘acknowledge’ the Climate Emergency in order to avoid using the ‘declaration’ word. Some have a declared a climate crisis to avoid using the ’emergency’ word. Others have resorted to quotation marks and have declared a ‘Climate Emergency’ to signal that this is a neologism and not subject to legislation associated with other types of emergency declarations.

However, declaring a Climate Emergency began as a grassroots bottom-up initiative. Declarations and associated actions are evolving organically with no centralised top-down control, which is how it should be. As far as we know there is not (yet) any legislation defining what such a declaration means or stipulating anything a jurisdiction is obliged or permitted to do if they declare a Climate Emergency.

It has been the jurisdictions that have already declared a Climate Emergency that have been shaping what such a declaration is coming to mean in practice. Every local council that follows through with urgency and high ambition inspires other jurisdictions to equal or greater action, while ’empty words’ declarations are counter-productive and could potentially derail an otherwise promising avenue for urgent widespread change. If any jurisdictions are already operating in full-scale emergency mode it is not yet obvious from news articles, but anything less will mean more deaths and more ecosystem destruction.

The vast majority of Councillors in the UK are affiliated with a particular political party so the UK provides the clearest example of cross-party support. Climate Emergency motions have been proposed by Councillors of all political stripes, and motions passing unanimously is not unusual.

In Australia many councils are either officially non-partisan or have many independents so trends are less clear. Anecdotal evidence suggest political bias is a factor influencing whether or not a declaration is proposed or approved, but at least one Liberal-dominated council has declared a Climate Emergency. 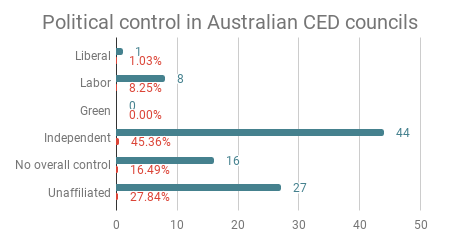 Political affiliations are not discernable for Councillors in Canada and New Zealand. In many cases affiliations are not published, and in the cases where they are, many Councillors are either independent or affiliated with local alliances rather than major parties. Patterns are also hard to see in European countries due to the large number of parties represented within councils, generally with no party having majority control.

Some states in the US stipulate that Councillors be non-partisan, including California where 36% of the declarations have occurred. Even so partisan influence is more clearly seen in the US than anywhere else. All 21 of the councils that have publicly partisan Councillors and a Climate Emergency Declaration have a Democrat majority.